DC Trip Take Two:  If you haven’t read part one of our trip, scroll down and check it out.  Otherwise, continue on…
Antietam:  Just a quick drive from Harper’s Ferry is the Antietam battle site.  If you have seen the movie, Glory, you will recognize this as where the movie opened.  It is such a sad story of a battle where about 23,000 soldiers died, were wounded or went missing.  Exiting the car, I immediately had a pit in my stomach, which was never eased until we left the site.  One of my favorite parts was climbing up the huge tower and seeing the views from all four sides.  There is also a cute town nearby with ice cream.  The drive on Harper’s Ferry Road from Antietam to Sandy Hook was just incredible.  It was a curvy, narrow road surrounded by trees, and it felt so relaxing, yet exhilarating to drive on it.
Monticello:  The next day, we woke up early, checked out of our hotel, and began our journey home.  First stop-Monticello, home of Thomas Jefferson.  This is a place my husband has always dreamed of going, and I was so excited to acquiesce to his request.  I can’t tell you how wonderful this place was.  Although it was hot, humid, and relatively expensive for our family of four ($110), I believe it was worth every penny.  There aren’t huge signs or fanfare leading up to the property, but a secluded drive through a forest of trees.  Once you get there parking is lush, green and shaded.  You pay and are taken up by a shuttle for your house tour.  The tour guides are so kind and knowledgeable.  The house exterior was beautiful, and the view was breathtaking.  He leveled the top of the mountain for the property, and one can see miles of green and blue hillside shrouded in mist in the distance.  Each room was filled with inventions from way before their time, and my vintage loving self could not soak in enough, especially the dining room.  A garden tour and slavery tour are also included with the price of admission.  His gardens made me drool with envy, and I saw my first artichoke plant in real life while there.  The slavery tour was humbling, as their lives must have been so incredibly hard.  I couldn’t fathom being separated from my family, let alone the food rations, the forced labor, or other worse atrocities they endured.  After trying out our calligraphy hand and buying some ice cream for our son, we headed down the secluded trail to Thomas Jefferson’s burial ground.   It is a private cemetery still visited by his relatives, and there were flowers on his and his family’s graves. 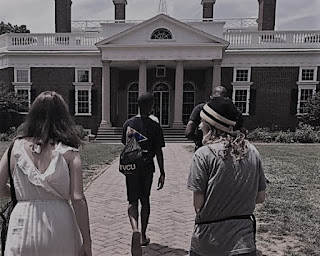 The walk up to Monticello 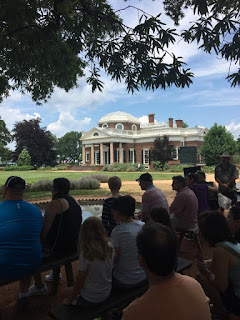 The back view while waiting for the Garden Tour 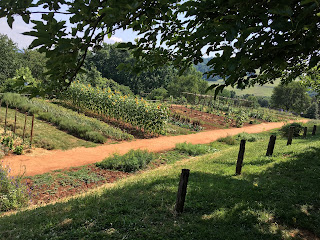 Jefferson's Garden (only a small portion) 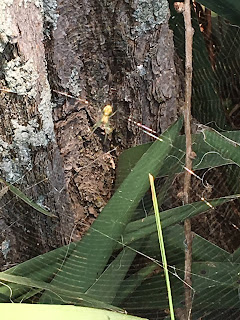 I saw this pretty web on the tour, and in the middle was a little yellow spider. 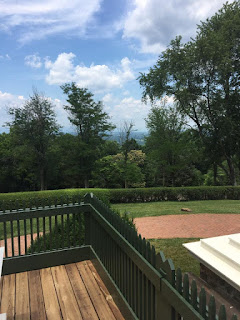 The view (the picture doesn't do it justice)

VA: After Monticello, we found a Comfort Inn in nearby Charlottesville nestled among the trees.  On the concierge’s recommendation, we visited Shadwell’s Restaurant, which was absolutely gorgeous and delicious.  The photos on the wall were beautiful scenes from the nearby Appalachians.  They even had a vegetarian Quinoa Burger, which my husband devoured.  My daughter and I had the Spinach Manicotti, which was also delicious, and my son loved his salmon.  We went back to the hotel and the pool was outdoor, but almost like swimming in a forest, due to all of the trees.  It was such a wonderful close to a perfect day.
WV: The next day we officially began our journey home.  We drove through West Virginia, which is so picturesque, and I can’t tell you how many times I wanted to stop and visit one of the little towns off the highway.  West Virginia was by far one of my favorite states to drive through on the highway. 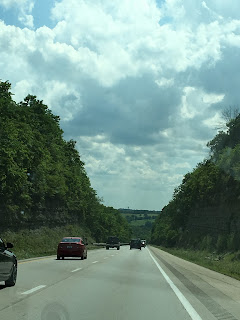 KT:  It was still beautiful and green all the way through Kentucky.  Kentucky has the horse capital of the world, Lexington, but unfortunately, I only saw one horse.  Both Lexington and Louisville were such pretty cities to drive through, full of cool bridges, rivers, and neat skylines.  On the border of Kentucky and Illinois, we ran out of gas two miles from the exit.  It was so scary having Dan and the kids push the car while I steered, thinking someone might hit them.  We were almost to the exit.  Thankfully, a woman with two of her friends and her baby stopped and gave me a ride to get some gas. 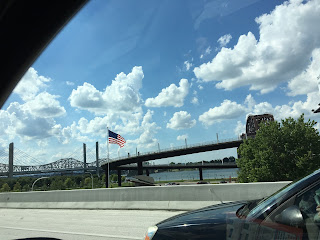 I believe this is Lexington, KT. 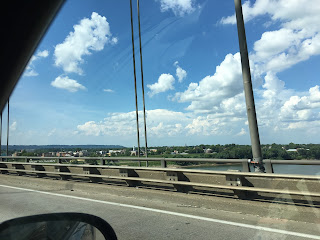 IL:  When we stopped for the night, it was in Southern Illinois, which is very different from Northern Illinois.
MO:  The next leg of our travel started with Missouri.  Missouri was also picturesque to drive through.  The trees started to dwindle out, and there were some pretty rock formations.  Both St. Louis and Kansas City were fun to drive through, though we didn’t stop.
NE, IO:  We kind of drifted between the borders of these states, and didn’t really stop, but it started to look more and more like what we are used to in North Dakota, being a little more flat, and trees, but not quite as lush.
SD:  One of my absolute treasured memories of the trip home was Sioux Falls, SD.  When we rolled into town, we went directly to the falls and they did not disappoint.  The mist that rose from the falls almost smelled like the ocean.  The downtown was so hip and beautiful.  We ate at a restaurant called Crave, and we were so glad we did.  It was a beautiful restaurant, and everyone there was dressed so nice, I felt a little self-conscious as we had travelled all day and it showed.  The food was just as beautiful as the restaurant and people, and even more delicious.  Our heads rested well on our pillows that night. 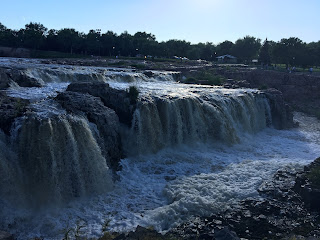 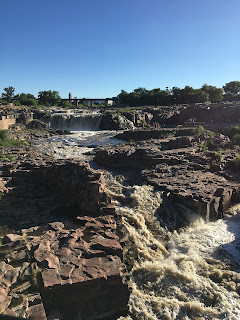 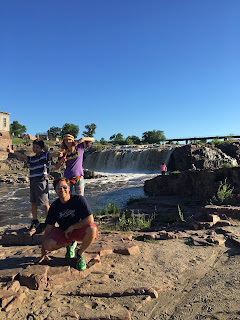 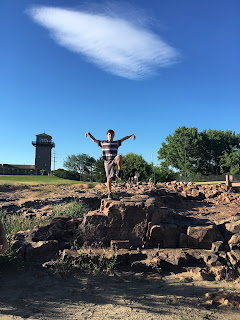 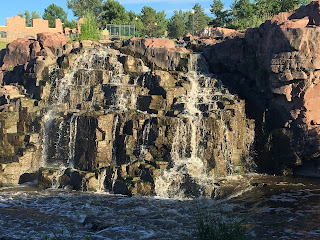 ND:  We returned home, through the rolling green plains, and then home to our Magic City, with its hills and its trees, and my kitty who I missed immensely. 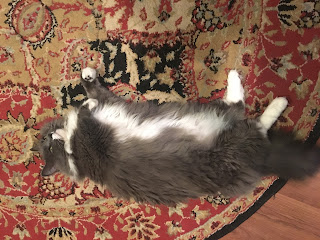 My friend
Posted by littlepinkdresslinda at 10:01 AM